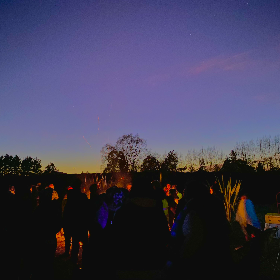 Matariki had been in my awareness.

Matariki had been in my awareness. Gwen’s death last July 16 brought Matariki to sharp consciousness. It was in the closing days of the Matariki period closing. A time to hold in our presence the loved ones who have died since last Matariki. I considered Hagley Park as site from which to view the group of nine stars viewed before sun rise. So they came to show themselves, but a FaceBook Post to which friends had shown interest alerted me to a witnessing on Marshlands Road. Ceremony, ritual, Karakia and Waiata. A hangi was opened for breakfast and a monster fire lit to prepare a hangi for lunchtime in the seventh and eighth hours. I woke at 5.15am. Breakfasted dressing with three and four layers. Taxi called. Arrive at the place of viewing 6.30 am with the temperature below -3c. Perhaps 100 - 150. Maori hosts and generously included guests through explanations and preparations. The day included tree plantings. I stayed only an hour and ten minutes. Returning to the roadside called a taxi. I had arrive in the care of an Egyptian and was to be taken home by a Sikh from North India. My participation was a wonderful sense of belonging in this land and within the universe whose movements guide and lead our appreciation and responses to our land. Gwen, her living and her dying part with me of the interweaving and flow of the rhythms of this land.

Learn an expression of hope in te reo Māori.

This year we are encouraging you to organise a shared kai for your whānau and friends.